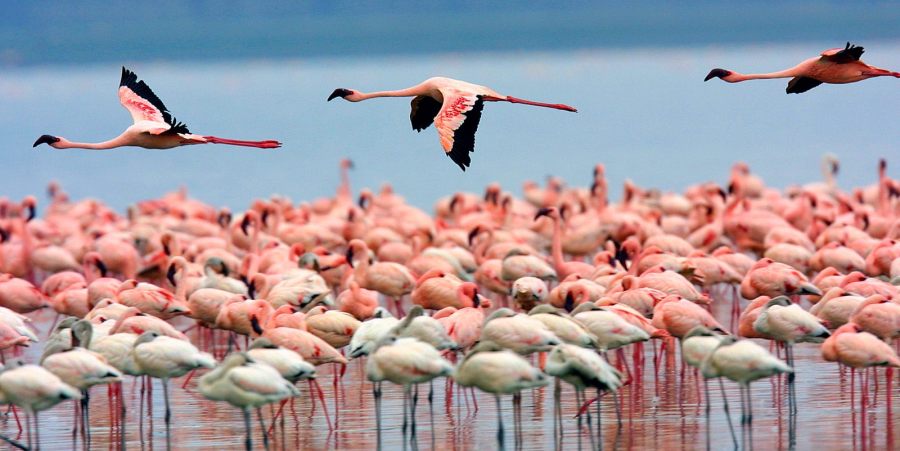 Lake Nakuru National Park was declared as a wildlife conservancy in 1957 and established as a National Park in 1961. The park surrounds one of Rift valley soda Lake, Lake Nakuru; other beings, Lake Bogoria, Lake Elementaita, and Lake Naivasha.

In the vast Great Rift Valley at an elevation of 1,754 Meters above sea level, is where Lake Nakuru is nested.

The Park is a relatively small in size, Its covers about 188 Square Kilometers. Despite its size, its one of the most popular in terms of what parks offers.

In this post, we will discuss lake Nakuru National Park and Lake Nakuru in tandem since the Lake is inside within the Park.

The Park is located 164 Kilometers from Nairobi, approximately 2 hours drive. It lies in the Great Rift valley of Kenya, South of Nakuru. Nakuru means “dusty place” in the Masai language. The park is one of the premier parks in Kenya; we highly recommend this park for bird lovers and first-timers.

Lake Nakuru is renowned for its thousands, sometimes millions of flamingos nesting along the shores. The lake, due to its alkalinity nature, supports the growth of the blue-green algae in large quantities. This alga acts as an attraction of thousands of greater and lesser flamingos.

The Park host two types of Flamingos, namely greater and Lesser flamingos; despite their name, their sizes can’t be of much of a distinguishing factor. The lesser flamingos have an extended black shade all over their beaks and have a darker pink coloring on their feathers and, in some instances, black spots on their wings feather. On the other hand, Greater flamingos have the black streak only at their beak’s tip and fainter shade of pink with feathers of a similar color.

A distance view of the lake makes it looks carpeted in pink. That’s why it is sometimes called the “Pink Lake’ or the “bird watchers paradise.

The ecosystem support over 450 bird species, over 56 different mammal species, including 4 of the big 5

(lions, rhinos, buffalo, and leopards). Other Mammals include; giraffes, monkeys, warthogs, cheetahs, hyenas, wildebeest, black-and-white colobus monkey, Vervet monkeys, and Olive Baboons, among others. Also, Pythons can be traced from time to time.

The park is the second-best in Kenya for bird viewing, closely behind arabuko sokoke National Park, which is the most popular in Africa for bird and butterfly viewing.

with 188 Square Kilometers fenced area. The primary essence of this park is to protect the highly endangered Rothschild’s giraffes, black and white rhinos.

Over 70 southern white rhinos, a good number of Rothschild’s giraffe, and more than 25 eastern black rhinoceros, one of the largest concentrations in the country, are hosted here.

It’s the Gem of the Park. The location is cathartic, the breezy feel of the cool

waters are relaxing, and the intense feeling of the drops meeting the ground a melody that is soothing to the soul. Although not as big as the Fourteen Falls, the falls are still very captivating.

The scenery of the Park is Spectacular. The park offers more than just wildlife while

standing at lion hill, Baboon Cliff, and Out of Africa, the three elevated points in the park.